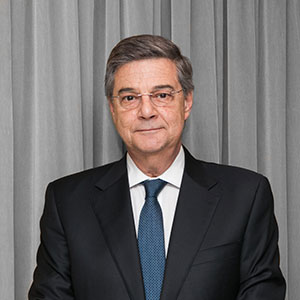 CHAIRMAN OF THE BOARD

Mr. Arapoglou is a Corporate Advisor with a long international executive career in Corporate and Investment Banking, International Capital Markets and in managing, restructuring and advising financial institutions. He was Chief Executive Officer of Commercial Banking at EFG Hermes Holding SAE Group, operating in the Middle East and Africa (2010-2013). Earlier, he was Chairman and Chief Executive Officer of the National Bank of Greece Group (2004-2009), Chairman of the Hellenic Banks Association (2005-2009) and Managing Director of the Global Banks and Securities Industry for Citigroup (1999-2004). He has served on several boards of publicly listed companies in Europe, the Middle East and Africa, as well as on Boards of Educational Foundations, including the Institute of Corporate Culture Affairs in Frankfurt, as Chairman. He is currently holding the following non-executive board positions: Chairman and member of the compensation committee of Titan Cement SA, listed on the Athens SE’ board member and member of the compensation committee of EFG Hermes Holding SAE, listed in Cairo and the London SE board member of the audit and risk committee of Credit Libanais SAL
and board member of Bank Alfalah, listed in Karachi, Pakistan, representing the International Finance Corporation (IFC) World Bank. He is Chairman of the International Board of Advisors of Tufts University in Boston, and a member of the Business Advisory Council for the International MBA program of Athens University of Economics and Business. He has degrees in Mathematics, Naval Architecture Ocean Engineering and Management from Greek and British Universities.