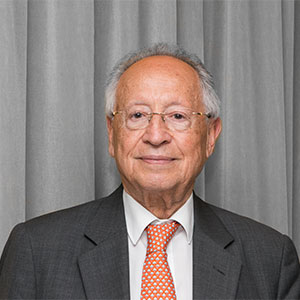 Mr. Mitropoulos is Secretary-General Emeritus of the International Maritime Organization (IMO), the United Nations specialized agency responsible for the regulation of international shipping from the safety, security and environmental protection points of view. After 23 years of service at IMO (ten of which as Director of the Maritime Safety Division), he was elected Secretary-General in 2003 and re-elected in 2007 for a total of the maximum time permitted of eight years. As a graduate of both Merchant and Naval Academies of Greece, he spent time at sea as a navigation officer and twenty years as a commissioned Hellenic Coast Guard officer, retiring as a rear admiral, having represented Greece at IMO and various other international fora dealing with shipping matters over a twelve-year period and having spent two years as Harbour Master of Corfu. Between 2004 and 2012, he was Chancellor of the World Maritime University, Malmô, Sweden and Chairman of the Governing Board of the International Maritime Law Institute in Malta. He is the author of several books on shipping, including texts on tankers, modern types of merchant ships, safety of navigation and shipping economics and policy. He is Chairman of the Board of the “Maria Tsakos” Public Benefit Foundation – International Centre for Maritime Research and Tradition and Patron of two international maritime organizations.